The Hill of Crosses | Lithuania

Two times in my life I’ve lost all of my photography and writings.  Twice, I’ve had to rummage through my belongings and choose what I can keep so that the rest can be thrown away.  I’ve lived a life of stopping short and starting myself all over—learning in the process endurance and resilience.

Though I have no physical monument set aside for my few, light hardships thus far in life, one place in particular serves as a reminder for me to not be deterred by the experience of losing and starting over.

The Hill of Crosses, Kryziu Kalnas, in Northern Lithuania was destroyed at least three times during Soviet occupation before efforts to decimate the pilgrimage site were abandoned.  The legend, according to my Dutch guide, is that efforts to destroy the monument were finally called off once a Soviet’s child was killed in the final demolition attempt. 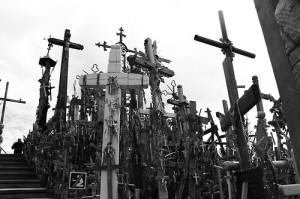 Surviving destruction and drawing more visitors over the tumultuous years, the Hill of Crosses has remained a place of peace and prayer for Lithuanians burdened by the state of their nation and the loss of their loved ones to sojourn and, of course, leave a cross behind. Today there are well over 100,000 crosses, rosaries, icons, crucifixes, and Virgin Mary’s; coins, flowers, and figurines of heavenly beings on the hill left by Lithuanians and international visitors/ pilgrims. 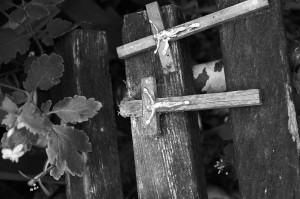 Informed by the site’s powerful story of overcoming hardship with peaceful resolution, it was impossible for me to walk through the multitude of crosses without feeling something heavy tugging my emotions from within. I found myself reverencing the ground beneath my feet, the crosses before me at every turn.  Carefully and respectfully I composed my photos to capture the gravity of the place so many once wanted to see destroyed; the place serving as another reminder that peace is something some evil men will seek to suppress with no intention beyond pure maliciousness.  The crosses had been placed out of mourning.  Lithuanians had prayed prayers of desperation at that monument, asking God when peace and relief would come to their country.  Visitors from across the world had pilgrimaged there to make peace with what they’d lost, to leave a cross in solidarity with those who’d also done so, or to align their spirits with peace they hope will one day imbue the world.

Conversely, the physical of the monument in itself is not at all peaceful. Swarmed by icons and rosaries, the piles of crosses and bevies of crucifixes draped anywhere they can be hooked overwhelm and nearly hurt the eyes.  It is rather disquieting. The religion on the hill is eerily puncturing as the frowning face of Jesus or the stolid face of Mary ominously confronts one at every turn—it’s almost claustrophobic. And the rows of crosses with names carved into them makes visiting the hill almost like visiting a mass grave. 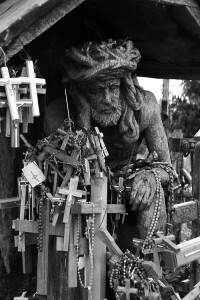 My incontrovertible sacrilege made room for a reckoning:  The solidarity of leaving a cross next to a thousand strangers’ must eliminate the noisy background and focus in on the will that brought the pilgrims to that shrine in the beginning. The intermingled rosaries and intermingling crosses represent beings hand in hand in constant prayer with myriads of Jesus’, Mary’s and angels looking on.

I left the Hill of Crosses, taking a final black and white photo of the entire hill; sad and quite baffled at the magnitude of an emotional journey I took in a 50-meter portion of land.  My visit was a little under an hour. In retrospect, I see what I was blind to noticing whilst I was peering into lifeless figurines of Mary and icon portraits of Jesus in painted picture frames:  In truth, I should have felt at home there among a million crosses and rosaries.  Just like the monument I have had to rebuild after being torn down over and over again. Just like the millions of Lithuanians and visiting pilgrims I have suffered loss and have desired peace in my tumult and for the world.  And just like that hill I will stand one day and others will see the marks and traces of my endurance and resilience to stand for something and thrive despite life’s blows.

I should have had some cross to leave behind.