Flight Deals: Use These Tools For Last Minute Holiday Travel

Thanksgiving is just weeks away, which means holiday travel season is officially upon us.

If you are just now solidifying your holiday plans and thinking it’s too late to purchase a ticket, you are still in luck.

A few companies have created tools just for people who are planning to travel last-minute:

In honor of Thanksgiving, United Airlines created a Thanksgiving Flights and Airfare Deals tool that allows you to choose flight deals between now and Dec. 5.

According to its website, there are deals from various cities across the country but restrictions may apply.

Some fares are as low as $135 round-trip depending on your departure city.

A trip from Baltimore to Houston is priced as low as $135 round-trip for the beginning of December.

Washington DC to Los Angeles is priced at $242 round-trip in early December. Like United Airlines’ tool, Expedia has a tool dedicated towards daily travel deals.

It works by plugging in your departure city to your desired destination city. From there, it will locate the best deals for travel dates selected.

A flight from New York to Chicago from Nov. 19 until Nov. 24 is priced at $226 round-trip, according to Expedia. You will have better luck if your travel dates are flexible. Expedia will show you various prices based on different travel dates. 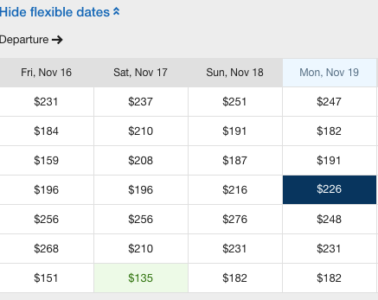 If your plans for Thanksgiving involve going away but you’re not sure where, Google Flights’ explore tool will allow you to check fares from your departure cities, including nearby airports.

Other resources that you can use to find cheap tickets within the next two weeks include Skyscanner, Hopper, and Kayak.

What you want to do so late in the game is to purchase your ticket as soon as possible and avoid purchasing at the airport.