Even though people brush off Costa Rica’s capital city to get to the volcanoes or beaches, San Jose is truly a hidden gem.

San Jose is a bustling city that offers a wide variety of things to do and see—especially outdoors.

Located just one hour away from the city are several waterfalls, volcanoes, and hills that will allow you to spend a day zip-lining, hiking, or both.

If you’re looking for the best views in San Jose, head to Restaurante Tiquicia up in the hills of Escazu. On Fridays, the restaurant serves traditional food and live music by local performances. As you dine, the surroundings of San Jose and nearby villages will be your backdrop.

Downtown San Jose is a great place to shop for local goods. Both the National Artisans Market and Mercado Central are great places for spices, souvenirs, and Costa Rican coffee.

Related Post: 4 Reasons To Visit The Caribbean Side Of Costa Rica

Plug in May 9 through May 17 as your travel dates to find the best deals.

Round-trip flights from Newark Airport are running for $279 round-trip from April 29 through May 8, according to Google Flights.

There are a few options from Chicago in early April that are less than $300 round-trip. Both options are for a trip from April 8 through April 15 on Spirit Airlines for $285 round-trip.

The only difference is flight time.

Flights are $103 cheaper than normal, according to Google Flights.

The cheapest flight option from Los Angles to San Jose is from August 23 through August 29, according to Google Flights.

The round-trip flight is priced at $314 round-trip. 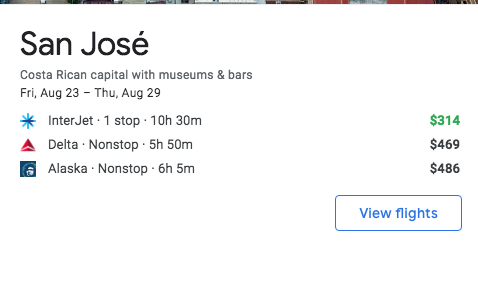