I don’t know what it is with me and late winter in Chicago. The very first time I went there, in my early 20’s, it was March (spring break) and I visited a friend at Notre Dame. We took the train from South Bend to Chicago and despite it being cold and rainy the entire time, she was determined to show me the Miracle Mile. With the gray skies, steady downpour, and the bite in the air… I was miserable. We did manage to enjoy one night there, when the rain stopped and we played truth or dare with a few guys we befriended. We ended up getting kicked out of the bar. That was awesome.

Suddenly, almost 15 years later I found myself booking a ticket to the Windy City mid-March, yet again and my heart was tormented. You see, I usually go to SXSW in Austin for the final weekend of Music. I crash performances, suck in every bit of experiential marketing possible, and connect with friends who visit from across the country. But this year was different. At the behest of my girl Bayyina Black, I submitted a speaker proposal to the Women In Travel Summit and lo and behold my proposal was accepted. I was headed to Chicago, not Austin. I felt guilty for being so devastated about missing SXSW. Here was my very first opportunity to speak at a conference–something I’d put on my personal to-do list but it wasn’t supposed to conflict with my social plans. I guess that was the universe’s way of telling me it’s time to stop playing and get serious.

The Chicago forecast leapt from a pleasant 51 degrees on the day of my arrival to bitter, freezing temperatures. On the Saturday prior to St. Patrick’s Day, the river was dyed green, per tradition. I had no idea this was a thing, so I knew I needed to see it. Sporting a knee-length, goose down parka, knit cap, and leather gloves, I joined two fellow conference-goers and headed toward the river and learned something. No matter where you’re going, even if you say the exact same thing, every single Chicagoan will tell you a different way to get to your destination.

We walked for blocks, seeing two sets of people come to fisticuffs at different times, and finally arrived at the bridge. The water wasn’t “St. Patrick’s green,” it was regular, old brown-green… Hudson River green. I was suddenly more conscious of the numbness in my hands and the mucus-rattling chill on my face. A security guard told us we weren’t down far enough, and we should head toward Michigan Avenue. We walked, but as we got closer to our hotel, I decided to abandon the mission. Foiled. The only thing I felt that kept the day from being a total bust at that point was reminiscing about lunch at Heaven on Seventh. It figures that my NOLA-loving self would go to Chicago and end up at a restaurant where it was Mardi Gras year-round. The words of my nutrition coach blew away on the river winds as I ordered a hurricane, Cajun crab cakes and a cup of gumbo. To say it was amazing would be an understatement. It was food porn. Oh, and I stole a few of my friend’s fried shrimp from atop her grits. And nabbed a piece of fried catfish from another friend across the table. Of all of the things, I tasted, the gumbo and fried shrimp were the defining items. I’d be perfectly content eating just those two things alone… with a hurricane.

Frustrated about not seeing the green part of the river, I retired to my room to work on my slides. My belly was still full from my Cajun culinary adventure so I powered through dinner time. Before I knew it, 10 p.m. rolled around and it was time to head to the conference welcome party at Gallery Bar. It would be rude to say the space reminded me of something in Manhattan, so I’ll skip that description and focus on exactly how amazing the art was. Blogging, traveling ladies separated the room from what looked like a birthday party. The women of WITS dominated, tossing back wine and the bar’s famous ahi tuna nachos. I ordered a craft cocktail from the menu and the bartender said they were out of the beer used for the libation. Because I’ve grown into a cocktail snob through the company I keep in Dallas, I challenged the bartender to just make me a whiskey cocktail. That was my only request–I’d given him full creative license. He moved busily behind the bar, measuring and mixing ingredients, demonstrating a strong and impressive dual-shaker drink shake. The finished product was served in a tall glass over large ice cubes. I liked it and asked what it was. He admitted it was the drink I ordered, just with a substitute beer. I was disappointed he didn’t surprise me, but that’s what “bartender’s choice” will get you when you’re not at a craft bar. I ended up leading the Cupid Shuffle as flurries swirled outside the window, and then matched notes with a fellow traveler about which art pieces we’d buy if we had the money. Afterward, me and one of my roomies decided it wouldn’t be a proper St. Patrick’s Day weekend if we didn’t end the night at an Irish Pub, so we stopped at Miller’s Pub and we traded “this one time…” stories with a hilarious girl who wouldn’t tell us which conference she was in town for. 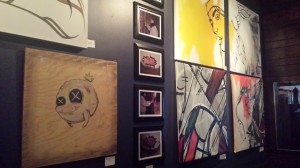 I kicked off my Sunday afternoon adventure invigorated from the success of my presentation. After the “brown girls” networking session at Flat Top Grill, I headed back to my hotel to change clothes and get ready to see The Blue Man Group. Now, I’ve never even had the slightest inclination to see that show. I understand it’s wildly popular, but I didn’t understand what exactly happened besides these silent blue-faced bald guys played music. My roomie and me headed to Boys Town on the train and decided to pre-game at Jack’s on Halsted. It was a whiskey kind of weekend, so I ordered an Old Fashioned to go with my Maine scallops,whole grain potato gnocchi, mushrooms, and white truffle-parmesan cream. There were two guys and a girl sitting next to us at the bar and we asked them what else is there to do in the neighborhood. The larger gentleman turned to us and said in a booming voice, “Well, if you go down that way it gets real gaaay,” pointing his finger with just the right amount of HUNTY. I was both surprised and tickled by him and we all kept each other entertained until it was time for the show.

I’m not going to lie, I sat through the first half of the show with a “what the Hell” face. I noticed that the people in the first few rows were wearing ponchos and concluded that it was eventually going to turn up in there. The audience roared at the trio’s antics: physical comedy paired with booming percussion and paint. At different intervals, three oversized iPhones were lowered to the stage for one reason or another. Then, things got interesting… they chose a man from the audience, outfitted him in a white suit and helmet, and sent him backstage where they covered him in paint, hoisted him by his feet, and flung him against a giant canvas (twice!) which resulted in a pretty amazing piece of artwork. Soon, the iPhones came back and gave “rock concert movement” instructions to the audience… pump your fist, wave your hands, jump up and down, shake your butt. It just got more and more funny and then suddenly black lights came on, pipe-like decorations began spinning from the ceiling, and several massive balls were released from the ceiling. The blue men leapt from the stage and were firing toilet paper rolls into the audience as confetti fell. My crew fled our seats in the uppermost corner of the theater and headed to the foot of the stage for our chance to push the balls around the theater. It turned into Vegas in there and I couldn’t have been happier. After the show, the blue men went to the lobby to pose unblinkingly for photos. There were hoards of people of varying age groups vying for their moment to see them up close. Creepy as they were, and weird as I thought the show was in the beginning, they’d made a believer out of me. I’d definitely take my family to see the Blue Man Group. 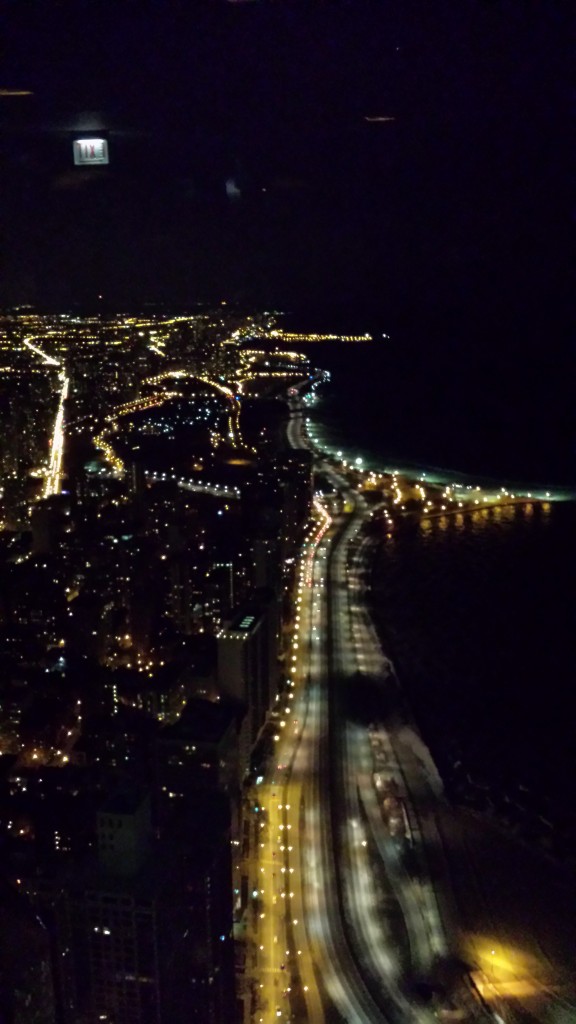 Our night was far from over, so we headed to the lounge at the Signature Room on Ninety-Fifth. The views turned all four of us–three of whom are native New Yorkers–into fawning little children ooh-ing and ahhh-ing at the views. There were more cocktails and creme brulee, and scores of photos. We toasted to a successful conference and a fabulous ending to an amazing day. Monday was my final day in the city and I headed to 1871, a coworking space in the Merchandise Mart to lunch with new friends from Meal Sharing. I know Chicago has a strong tech community, but the 1871 space gave me such strong Silicon Valley feelings. I was impressed to say the least. As my time ticked away, I met Bayyina at Cloud Gate to take goofy photos at “the bean” and we walked to Giordano’s to experience an authentic, Chicago deep dish pizza. I was overwhelmed with the sheer size of the thing, despite us ordering a small. It was literally a pie of pizza… and it was sweet, sweet gluttony. I seriously felt like I needed to go run a 5k afterward to make up for it. But instead I bid my friend goodbye and headed to the airport. I left fulfilled, happy. Even though I went there for an entirely separate purpose, I feel like I experienced Chicago–The Loop, at least. I wasn’t even mad that it was 31 degrees outside.

This story was curated by Quia Querisma