Ethiopia
Travel Noire • Nov 26, 2013
“I chase my aspirations, in an attempt to quench my thirst for exploration.
Suddenly, God reveals the peace to be found in contentment.”
Last year I embarked on a life-changing mission trip of giving in Ethiopia with a group of truly inspirational and visionary individuals. We set out to explore the beautiful city and people of Addis Abba. Upon arrival at our guesthouse, we were warmly greeted with open arms and loving spirits by the owner and staff. Full of character and charm, the Toronto Guest House was exactly the modest type of lodging we desired. There were no elevators to reach the top of its three floors with our luggage. Wifi was only accessible in the common area. Meanwhile, the dining area is where most of our bonding occurred during the trip, and a patio was available to take in and observe the the daily tasks of the locals. Once unpacked and settled, we reconvened in the lobby and set out to hit the streets. We came across an open meat shop with a butcher wielding two very large knives eager to give us a photo-op. Shortly after, we encountered a group of beautiful, young and gleeful Ethiopian princesses. To our surprise, the young ladies surrounded us and began to perform a cheerful Amharic song, clapping and dancing through their performance. This was my first clue into the the insurmountable joy and culture these people possessed. A day later, as we made our way through the capital, our van continuously thrusted itself into busy streets crowded with cars, people, cattle and chickens among other things. It was truly a sight to see! As we waved and snapped pictures, people responded with big smiles and embraced our curiosity of their daily happenings. A specific nuance I noticed that day was the high volume of hair salons on nearly every block. If there is anything commonly known about Ethiopian women, it is the beauty and vivaciousness of their hair stands as their trademark. Every style was on display – top knots, flowing roller-sets and stunning traditional braided styles resembling crowns adorning their head. Unfortunately, time wouldn’t permit us to experience our own first-hand experience in an Ethiopian salon. Exploring the landmarks also proved to be an unforgettable highlight. First on our list was the Lion Zoo. However, don’t get your hopes up on visiting the zoo because it’s a small-scale facility with minimal animals. Personally, I’ve never been a fan of zoos. This is due to the fact that I don’t like seeing things caged up, including animals. I’d much rather see them in their own habitat. Thankfully, our visit was short and we were off to the next destination in less than 20 minutes. Our informative local guide, a lawyer/pastor, patiently explained every aspect of the city. We visited the Addis Ababa University and were led through the campus to the Ethnographic Museum, the old Imperial Palace of Haile Selassie. Here, tourists can visit the emperor’s bed chamber and take in other interesting intricacies and artifacts. We also passed the Lion of Judah Monument, an Imperial symbol of Ethiopia.

Our visit to Ethiopia fell during Enkutatash, Ethiopian New Year in Amharic. They follow the Ge’ez calendar and the new year usually starts on September 11; only this year was leap year meaning New Year’s fell on September 12. Interestingly enough, for the visitors on the trip, we knew the year as 2012. However, for the Ethiopians, they were ringing in the year 2005. We jokingly considered coming back in December for refuge as we approached our impending demise given all the hoopla surrounding the “end of the world” talk! In all seriousness, the city was filled with excitement on New Year’s Eve, including the staff at our guesthouse who dressed in beautiful garbs.

The visitors and I enjoyed a national dish called Wat, a spicy stew served with injera (a pale spongy bread). This dish is consumed with your fingers. While it was very different from what I was expecting, I fell in love with this dish and its flavor. We also participated in a coffee ceremony, which has a very important and unique way of preparing and serving bunna (coffee). After the ceremony, the women broke out into a dance prompting us all to dance along. At one point, my friend Juliette joined in their circle of celebration after she had caught on to the movements! Later, we visited Meskel Square which had a huge banner across the entrance acknowledging the new year. As we embarked inside, we were approached by people trying to sell us different trinkets while some simply asked for money. We offered smiles and moved on toward the entrance. There was a small fee to gain access to the markets and all of the venues were stationed in close proximity of one another. The indoor market vendors sold everything from spices to knockoff Nike sneakers. Despite being overcrowded with patrons bargaining with eager merchants, I purchased pieces of beaded and gold jewelry to give as gifts. At a different shopping complex in Addis, we found a market with only female merchants. We were immediately drawn in by vibrant colors of the hundreds of traditional dresses and scarves.

All of the garments were embellished and adorned with intricate embroidery. The counters were overflowing with jewelry and leather accessories and the women tempted us with their finest merchandise. Going from vendor to vendor, I immediately turned for the exit, not to get away from the temptation. Instead, I needed to find an ATM! They called after me, fearing they would lose a sale. I promised to return and went in search of securing more funds. When I returned, I visited practically every counter, purchasing at least one item. (They were all gifts of course, I promise!) My favorite piece was a traditional tan dress with gold fibers weaved throughout and heavily embroidered with bronze designs. I’ve yet to wear it, but I left the market with a satisfied shoppers high! 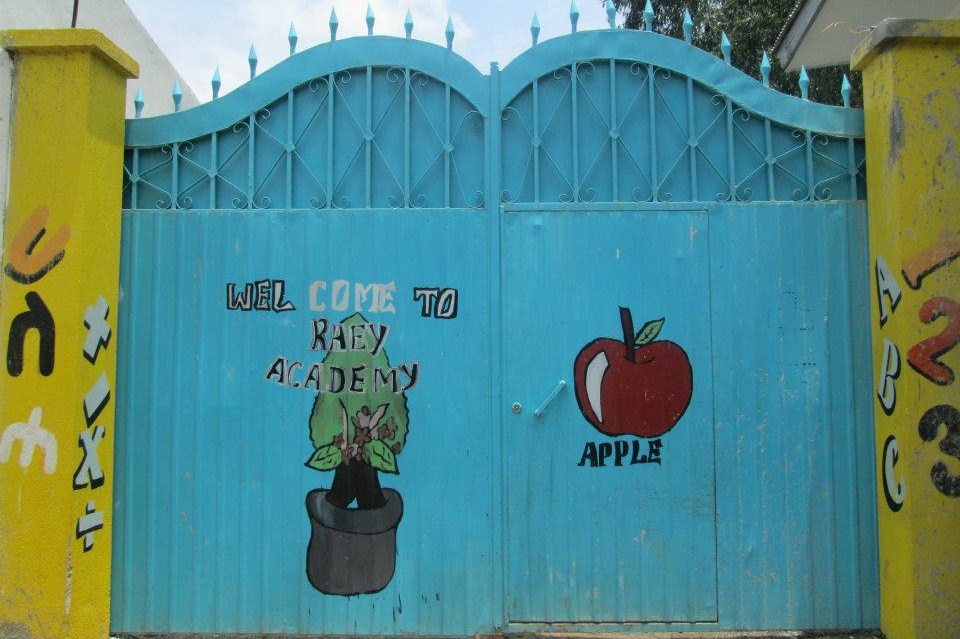 Vastly more important than shopping or food, however, the purpose of our trip was to visit the Raey Foundation Academy. To get there, we took a very scenic route to Yerer in the eastern part of the city. What seemed to be the residential part of the city was crammed front-to-back with tin sided houses and men and women lining the streets selling vegetables, spices and other essentials. When we finally exited the vehicle, we were greeted by the owners, a husband and wife who commit their lives to aiding impoverished children and families. They provide schooling, nurturing and support. Shortly after our arrival, we were taken around the compound that was under renovation to provide an even better environment for the children. Slowly, the children and mothers started to fill the courtyard and I was overtaken with emotion. Although they were dealing with extreme poverty they showed genuine smiles and a peaceful disposition. These were some of the most innocent and beautiful children I’ve ever seen. 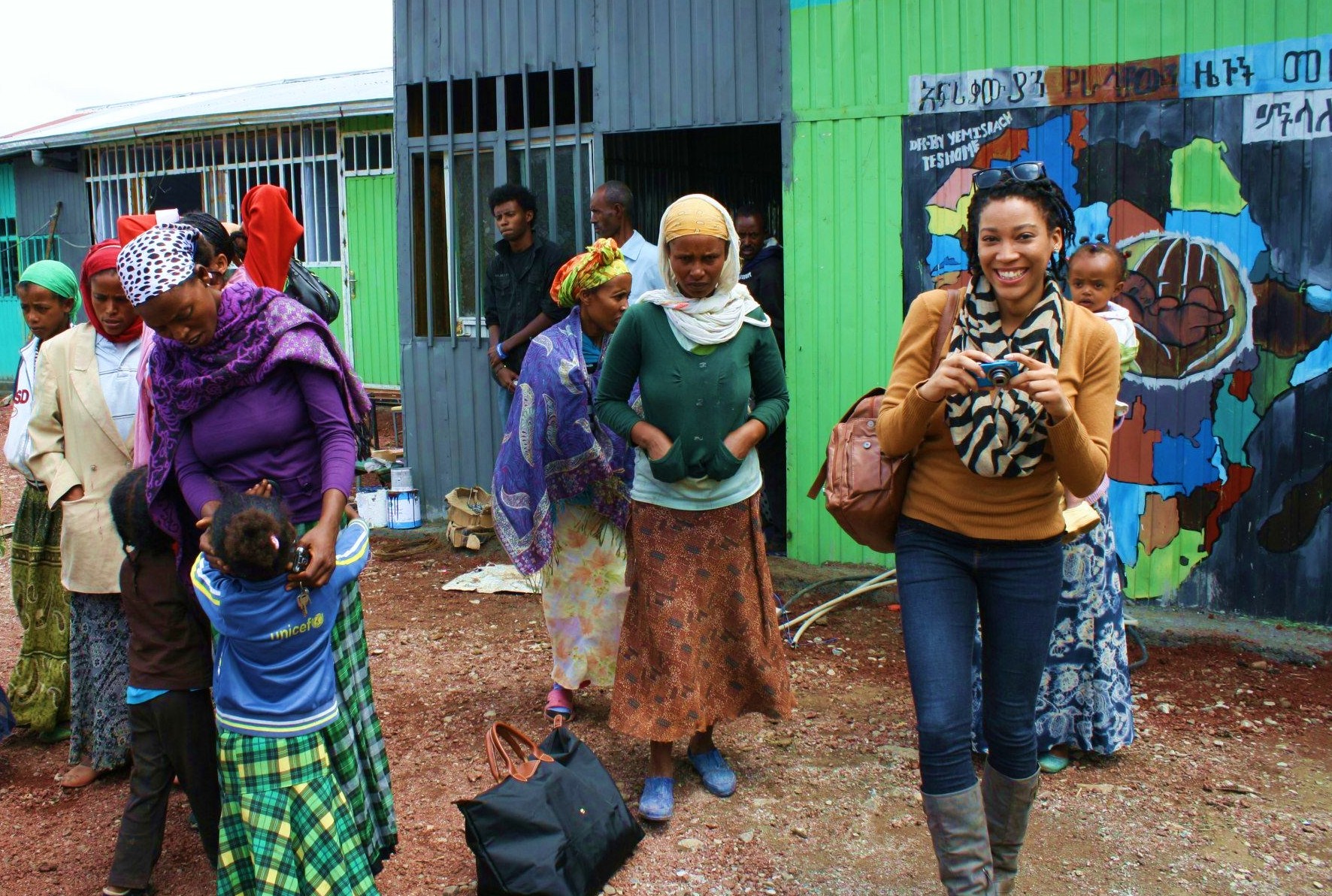 We spent time ministering to them and providing small gifts. By the end of our stay, it was painful to part ways with them because we all wanted nothing more than to take them with us. As we headed back to the van, our disposition was reflective and humbling. For me, it was a reality check: Appreciate the gifts we have in life instead of complaining about what isn’t in our possession. People make more with explicitly less everyday and never underestimate how life always manages to put our lives in perspective by mingling with others. This story was curated by LaToya Jones