Cuba: Off the Beaten Path

In the middle of December, I disembarked a charter plane. After pinching myself twice, I rubbed remnants of sleep off my face. Though I arrived in the middle of winter, I was greeted by a warm breeze, ​statuesque palm trees, and rays of sunlight that kissed my cheeks. I was in Cuba and I was elated. I’d always dreamt about viewing sunsets from El Morro, buying old books from markets in Havana Vieja, and salsa dancing into the wee hours of the morning. And though I’d never stepped foot in Cuba prior to this day, I knew the people were passionate, the food was flavorful, and the country was real.

But first, let me explain how I got there. A few weeks prior, the team, knowing about my slight obsession with Cuba, asked me to travel to Havana to share my experiences with our community. I jumped at the chance. Unsure of how to plan this monumental trip, I began by researching visa requirements. Despite the recent renewal of US-Cuban relations, I knew that entry to Cuba could be confusing. Travel for strictly tourist activities (i.e. beach hopping, mimosa-tastings, etc.) is still not permitted, and Americans must fulfill one of twelve policy reasons, such as visiting a close family member, working on a humanitarian project, and the elusive people-to-people contact. Luckily, many tour operators have created trips that cover the people-to-people requirement & assist people with securing visas, so I was set.

Next, I had to choose a temporary home. I craved interactions with locals, so choosing Airbnb was the absolute perfect solution. Through its network of casa particulars, popular private home stays, I’d be able to eat, breath, and sleep like a Cuban! My neighborhood options were between Vedado, Havana, and Playa. However, knowing that I wanted the most action, I chose to stay in Centro Havana.

Fast forward a few weeks. After moving through the customs & immigrations line, I ran outside. Rocio, my guide, greeted me with an energetic “welcome!” and grabbed my bags. Within moments, a 1957 Classic Chevy appeared & we hopped in. We began discussing our plans over the next few days; however, the conversation soon sounded like distant chatter, as the country’s rich soil, the street chatter, and colorful buildings grabbed my attention. After arriving in Centro Havana, I knew that I made the right choice. Music blared through apartment walls. People danced in the middle of the streets. Bici-taxis whizzed through the streets. The neighborhood, though surrounded by decaying buildings, was colorful and alive. 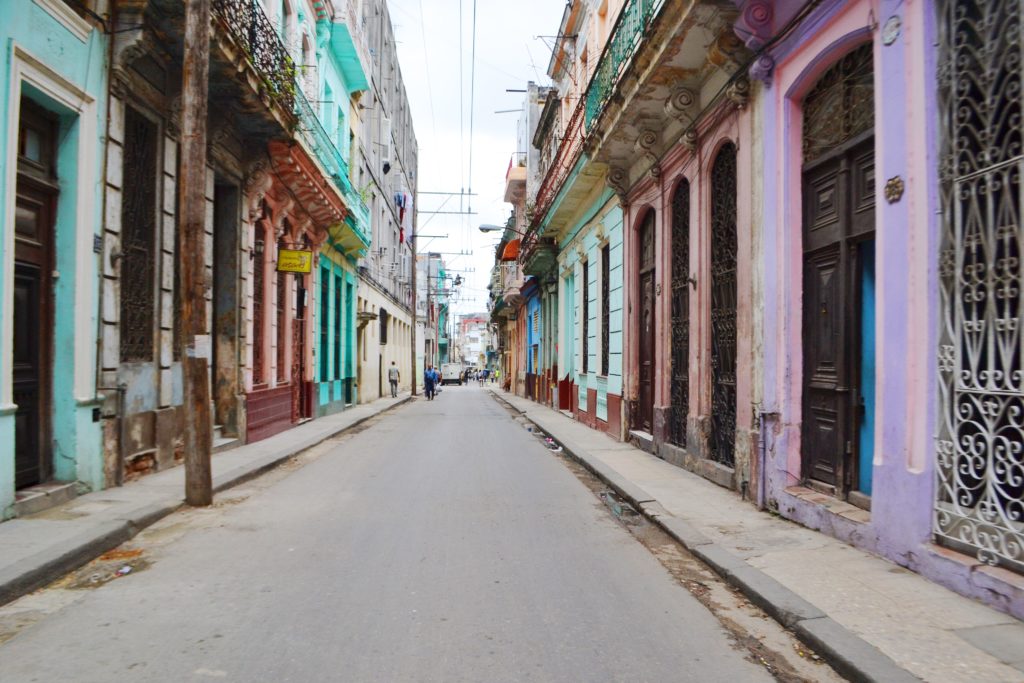 I opened the door to my new digs, a five bedroom casa particular, perfect for meeting new friends & living like a local. Over the next few days, I would bond with my host, Señora Raudelina over breakfast, sharing intimate details about our countries’ culture and history. Every morning after, we discussed politics, the art scene, her adventures to Europe, and some of her favorite places in the city. And when I wasn’t exploring, I looked forward to recapping the day’s events with her. None of this would have been possible if I’d stayed at a hotel! 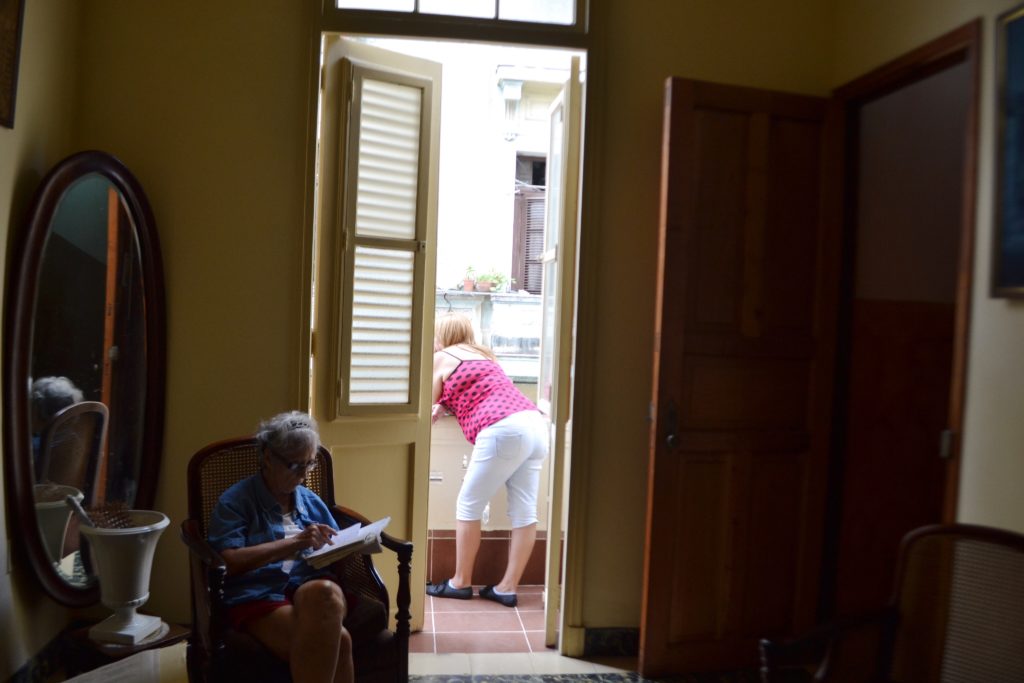 The following day, I ventured to Havana Vieja to check out the city’s Spanish architecture. Despite its traditional nature, today, the area represents a blend of old and new. As I walked through narrow cobblestoned streets and various plazas, the streets were lined with restaurants, stores, and several art installations. 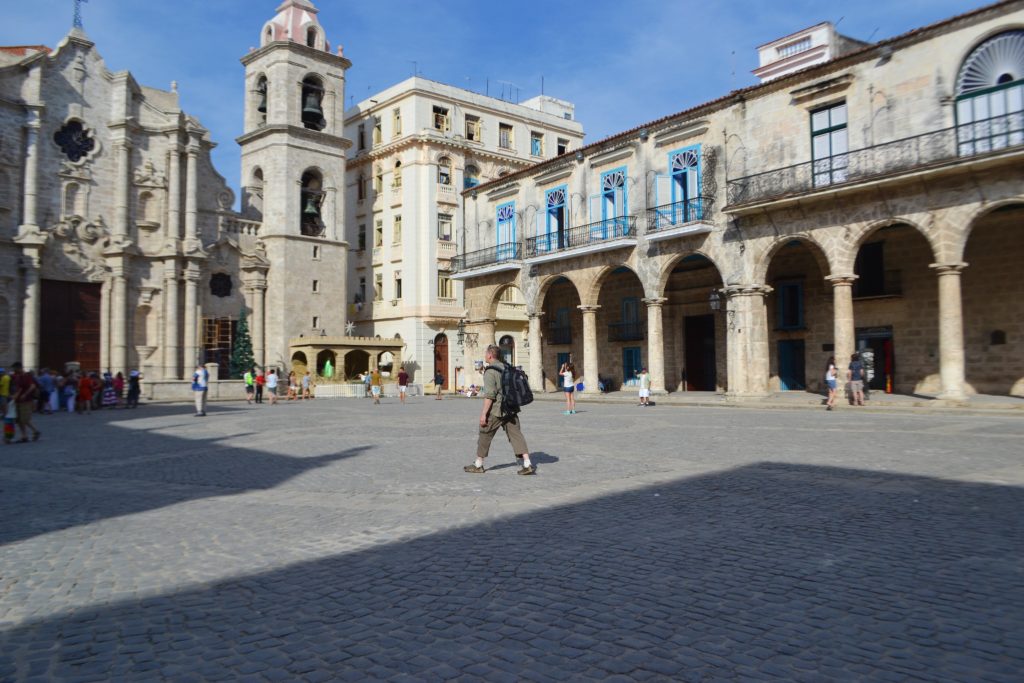 After settling on Dona Eutimia for lunch, where I delighted in my favorite Cuban dish, arroz con frijoles, I strolled over to Taller de Grafica Experimental. The printmaking school & studio, founded in 1962 by mural artist Orlando Suarez, was lined with artwork. Students filled the studio and worked busily to create new artwork. Because the next few days were filled with torrential rains, I decided to explore before the downpour. Per Senora Raudelina’s suggestion, I contacted Juan Luis, my soon-to-be trusty bici-taxi driver. It was 7am, so the city slept. Juan Luis and I spent the earlier half of the morning, zipping through streets & visiting the Plaza de la Revolucion, where we first chatted up some soldiers after their morning drills. We head back Centro, and the city really woke up. Salsa music and reggaeton played through apartment windows. People began to fill the streets, children chased each other, and the classic Chevy’s lined the roads. I stopped to chat with locals (something that would have previously paralyzed me), and we shared our love over Cuban food, salsa music, and excitement over the increase of Americans’ arrival. The following day, I traveled to Vinales Valley with Pachi, my driver. Viñales, located on the west end of the country, is known for sprawling landscapes and farms. From Havana, we traveled for three hours and finally reached a tobacco farm where we topped off on Cuban coffee, chatted with the farmer, and discussed the meaning of mulata (apparently, my complexion) in Cuba. After exploring the tobacco farm & natural caves, we ate lunch at a farm-to-table restaurant. The small restaurant was located in the middle of an organic farm. I paused to take in my surroundings & inhaled the fresh air. Within moments, the staff brought out various dishes & we feasted like kings. On our way back to Havana, Pachi stopped & asked me to drive. Knowing I’d never get a chance to drive a classic Chevy in the middle of Cuba again, I couldn’t refuse! Without any hesitation, I took control over the wheel. We continued for about fifteen minutes, when I suggested we take an impromptu-photoshoot. Luckily, he indulged my request! 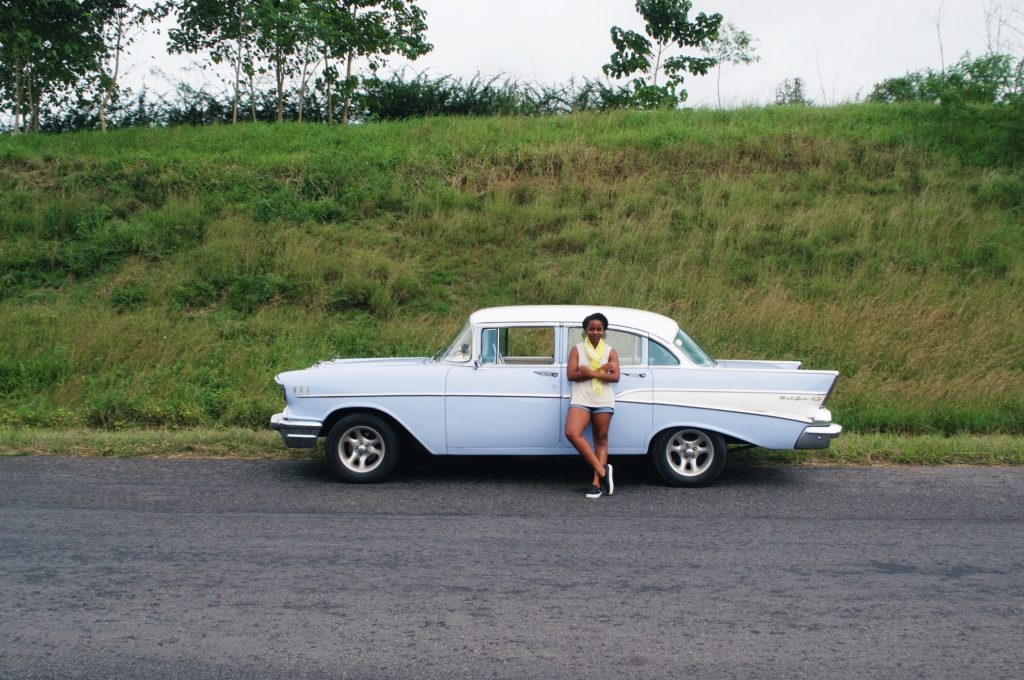 On my final day in Cuba, I was lucky enough to wrangle one of my flat-mates into visiting La Guarida before my flight out of Cuba! The restaurant, housed in 20th century mansion, was beautifully antiquated. Though paint peeled off the walls, sun rays peeked through, making for a magical final experience. Traveling to Cuba was unlike any experience I ever had. Thanks to the central location of my Airbnb, I was able to easily adopt the Cuban culture and because of my hosts, I truly felt like a local. It was everything that I’d imagined. The food was rich and flavorful. The people were passionate and inviting. Havana, itself, was beautiful & modern, yet traditional. My heart already belonged, even though this was my first time there. It felt like home.