When I stepped out of the airport, after arriving in Bangladesh, the air was heavy with the fragrance of spices.  Someone must have been preparing a curry nearby.  Dhaka, the capital, is one of the most densely populated cities in the world and it becomes most apparent while sitting in traffic.  It moves at a snail’s pace and it seems like every person of driving age has a car, and is on the road, AND going in the same direction that you are.  Further complicating things are the CNGs (tiny motorized rickshaws), giant tricycle-like vehicles, people on bikes, people walking and people carrying food in large wagons.

I was in Dhaka for a work conference, and often on such trips, I try to escape the conference venue to get a better sense of where I am and get a feel for how people live.  On this trip, I had an opportunity through a colleague, to visit the Arban School, which is a small elementary school that receives most of its financial support from Europe and educates neighborhood children through the fifth grade.  The children who attend this school live in the surrounding low income areas, also called slums.

When I walked into one of the classrooms with my colleagues, I greeted the students and told them that I was from the United States, how excited I was to be visiting Bangladesh and how much I enjoyed the food (which was true).  One of my colleagues translated for me, but the children were very quiet.  I thought, or hoped, it was because they were very well disciplined or maybe shy because they hadn’t seen anyone who looked like me before.  I had really wanted to connect with them so I when we went outside to take pictures, I tried to chat with some of the little girls standing nearby through motioning some of the hand clapping games I used to play during recess when I was a child and a funny thing happened… the little girls recognized the game!  I was so excited!  A group of us formed and we began playing a game where you clap hands with each other.  The other children gathered around and sang along.  The hand clapping game we performed was similar to the game called Rockin’ Robin, but the little girls were singing a Bangladeshi song.  I was transported back to my elementary school days on the playground. 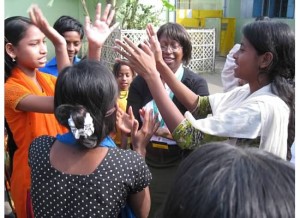 Who knew that a hand clapping games would unite little (and big!) girls around the world!