The Results Are In: Black Travelers Say This City Has The Best Food In The U.S.

One of the greatest parts about traveling stateside is experiencing the best food from across the U.S. Of course, travelers may find the same fast food no matter where you go, but besides that, there are so many unique options to choose from. So TN wanted to know which American city has food that is worth booking a flight? Twitter had a good time answering this one.

Question of the day: Which American city has the best food? pic.twitter.com/atZQWj3KEL

We got responses from all over the United States, but one city was the clear winner: New Orleans. 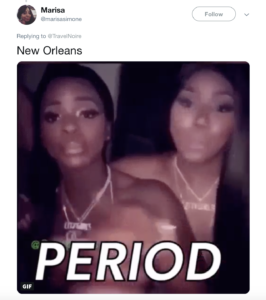 Home of everyone’s favorite chicken chain, Popeyes Chicken, NOLA is known for their unique cuisine that gives the word flavor a new meaning. The city is famous for spicy seafood, gumbo, po’boys and so much more. Travelers might even be able to get a particular New Orleans delicacy called alligator. That’s probably only for the brave.

So many cities made the cut, but the Big Apple took second place.

One follower got it right by calling New York City “a melting pot.” As a city with a food truck on just about every corner, New York has a variety of food options that travelers possibly can’t get anywhere else. From $1 pizza, mouthwatering subs, juicy hot dogs and don’t forget about the halal food with the white sauce. You’ll definitely have some calories to burn off by walking those long city blocks.

There were definitely some honorable mentions on the list. Like Houston, Texas. Home of shiny grills and Queen Bey, travelers say your taste buds will be satisfied.

Miami also made an appearance. Eating some Cuban food or tasty fish tacos on the South Beach sounds like the perfect vacation. 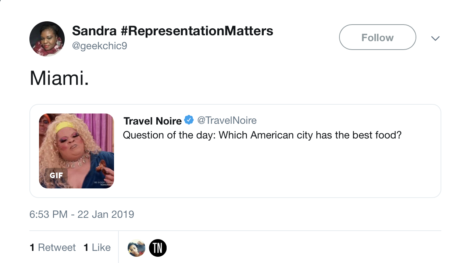 Of course, food doesn’t immediately come to mind when you think of certain cities. But we are sure some spots will make you want to visit. It’s clear that travelers can get food no matter where they go in the country, but one follower wrapped it up with one tweet. Wherever the culture is, that’s where the good food is.

Get Paid To Travel The World | Travel & Earn | TravelNoire