An American In Cuba

Going to Cuba has always been on my bucket list. When I was backpacking around the world, I frequently ran into Canadians who had been and gushed about it. When, I wondered, would the US government ease restrictions on Americans traveling to this fascinating island? In 2011, 51 years after the initial embargo was placed on Cuba, President Obama lifted some of the travel restrictions. While it’s always been true that you can travel to Cuba via Mexico, Canada or a Caribbean island as a US citizen, Obama made it legal. Unfortunately, these eases in restrictions do not translate to an open border policy.

The US government now issues person-to-person visas and authorizes specific travel agencies to take groups of Americans to Cuba on cultural travel experiences. I begrudgingly agreed to go on a group tour so that I could experience Cuba’s 30th annual Havana Jazz Fest. My group of 112 jazz enthusiasts spent eight days and nights learning about the unique historical background of Cuba, how the history affects its people and how it all translates to Cuban art and culture. And we got our fill of jazz, too.

I’m no history buff, but I can give you my Cliff’s Notes version on Cuba’s history. Leading up to the 40s & 50s, the island enjoyed a prosperous history of trade with the US and had a booming sugar cane industry. At the head of the government was a dictator who, at every opportunity, pilfered from the nation’s surpluses. In an attempt to bring some egalitarianism to the people, Fidel Castro and his right hand man, Che Guevara, staged a revolution. It didn’t go well initially, but they eventually made it happen. To equalize the nation, Fidel bolstered education and heath care; he denounced trade with the United States, and his government took over the people’s finances–all of which benefited the poor and disenfranchised Black Cuban population but forced wealthier Cubans into exile in the US. 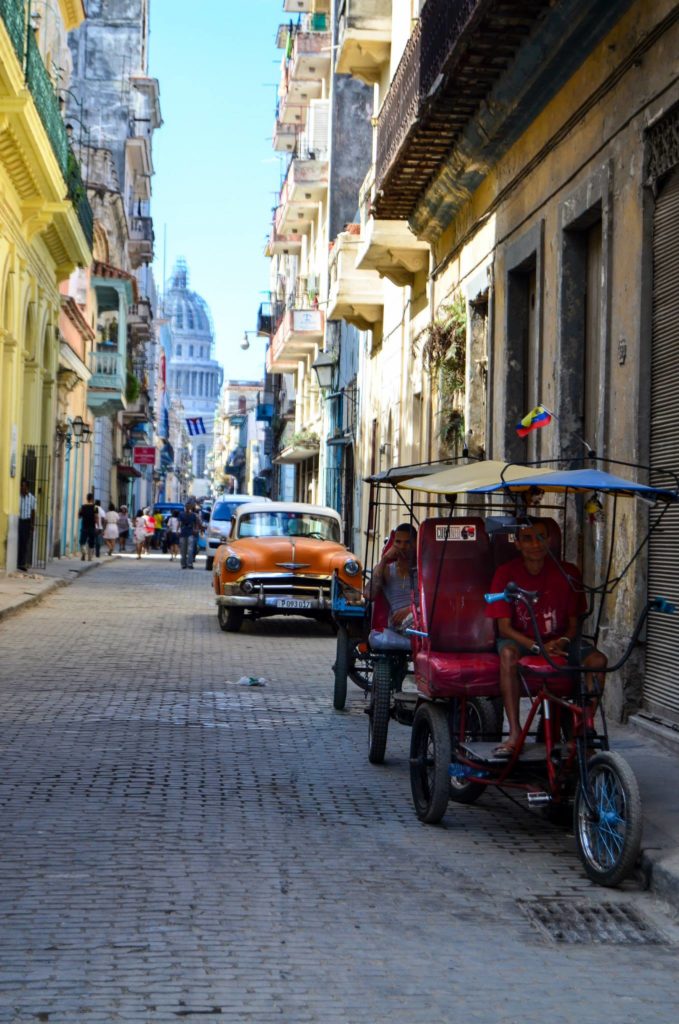 Fast-forward 50 years and the island’s economy is struggling. The iron rule of the government created what’s called an inverted professional salary pyramid. This means that doctors and lawyers make pennies because they’re paid a standard government rate. Meanwhile, tour guides and people peddling knick-knacks in tourist markets rake in all the money. I found it fascinating. Every aspect of life as I knew it was turned on its head. Of course I’ve been to places with no Starbucks nor McDonald’s, but a world with virtually no advertising? There are no billboards because the government owns everything, and you’ll buy what they give you. That phenomenon, combined with rarities like two active national currencies and the monthly government distributed food rations, had me intrigued.

One doesn’t have to look far to see how the socialist system has a ripple effect throughout the island in infinite ways. It’s the only island I’ve been to, thus far, with little to no beach culture. I literally forgot that I was on an island. The nearest beach to Havana is a 30 minute drive, and I was told that locals only frequent it during the hottest days of summer. There’s very little seafood offered; pork is the main staple on menus. The majority of the island’s population is living an urban city life, trying to earn enough money to augment their government salary. I suspect these conditions are why the art and music scene thrives as much as they do. People need a creative outlet, not to mention a second income, doing something they love. There are guitarists on every other street corner in Old Havana, along with sculptors, painters and the occasional caricature artist peddling original artwork. At late night Jazz Fests events, teenagers swayed to smooth saxophone rifts and keyboard solos, which seemed like music well beyond their years.

While I am the world’s worst advocate for group tours, I enjoyed getting an inside perspective of Cuba from my tour guide. He was able to provide details about daily life that I most likely would not have gotten had I visited the island as a backpacker.  Cuba’s culture and history has me hooked–from the amazing architecture of Old Havana to the picturesque town of Trinidad to everyone’s favorite: the vintage cars. To top it all off, they have some of the friendliest locals I’ve ever experienced (and I’ve lived in Thailand!) Now that I’ve done the official cultural group tour thing, my plan is to return and bicycle, east to west, exploring the intricacies of the island on my own.